No foosball this year due to drive thru only. 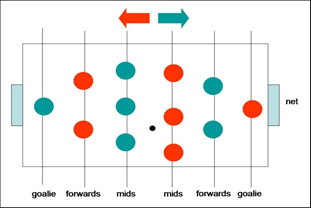 Once a penalty occurs, the non-offending team gains possession of the ball in the mid-field position. Penalties occur when:

How the Game Ends

Tournament and Other Matters

Sponsored by Rotary Club of Miramichi

Part of MightyMiramichi.com
Support by MCG